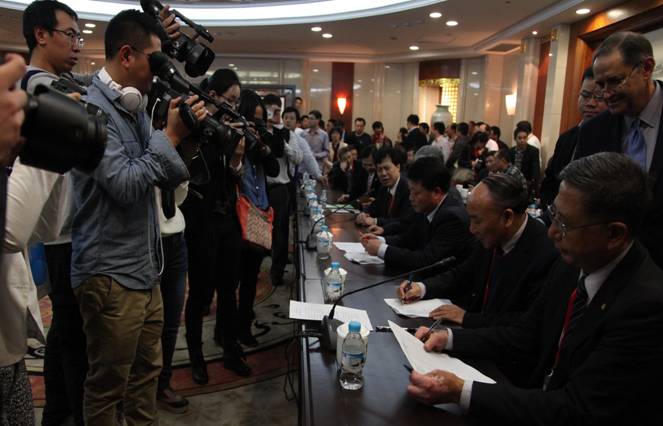 Participants from left to right in the enclosed picture: 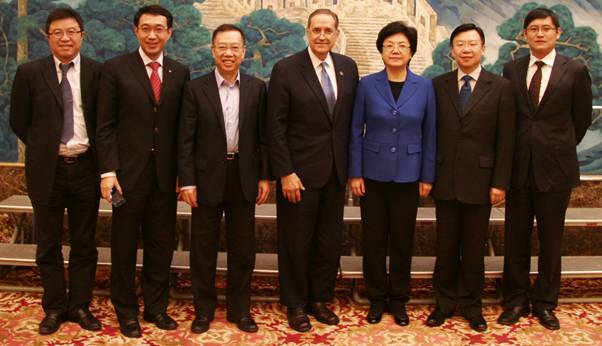 This meeting at the Ministry was arranged by Jiefu Huang  ---with much appreciation.

Minister Bin Li initiated the discussion with a prepared statement of a five-point plan for organ donation and transplantation under the authority of the National Health and Family Planning Commission of the People’s Republic of China (NHFPC):

The practice of human organ procurement and allocation will be “open and transparent” by an executive order (The Human Organ Procurement and Allocation Regulation) released from the NHFPC in August 2013 that requires:

·         Transparency in the allocation of organs to a national computerized waitlist (COTRS);

·         The development of the organ procurement organization structure in each province;

·         The training of organ donation coordinators.

This regulation of the NHFPC is aligned to the State Council directive that mandates transparency and fairness in the practice of organ transplantation in China.

Minister Bin Li further emphasized that the recent mandatory implementation of an information technology system (COTRS) accomplishes a transparent and fair practice of the distribution of deceased donor organs in China.

The authorization of 169 transplant centers to provide transplant service in China;

The scientific registry systems for the transplantation of liver, kidney, heart, lung, intestine and pancreas will record each case of organ transplantation in China with appropriate follow-up of the recipients.

A regulatory authority of NHFPC that oversees the practice of organ donation and transplantation in China, referenced to more than 30 existing laws and regulations developed by PRC State Council and NHFPC since 2007.

Minister Bin Li expressed the resolve of the PRC Government---- that the reliance of transplant centers upon organs from executed prisoners-- must cease. The government of China has affirmed its commitment to prohibit transplant tourism and shutdown organ trafficking and transplant commercialism.

The five-point plan as elaborated above was then promulgated at the 2013 Chinese Transplant Congress in Hangzhou (November 1-2) -- releasing the Hangzhou Resolution as a commitment of NHFPC to align practices of organ donation and transplantation in China with WHO Guiding Principles and the Declaration of Istanbul, ---and subsequently adopted by the World Health Assembly.

China needs the support of the international community to implement this new system and the international community needs the involvement of China in progress of organ transplantation as a field of medicine. The Minister was concerned to learn that the experience of Chinese transplant professionals had not been either sought or accepted because of the reliance upon the use of organs from executed prisoners. However, as of this seminal interaction, she pledged her commitment to resolve that exclusion and to promote an academic exchange with international community.  That academic interaction will now have the underpinning of the five-point NHFPC plan, to include cessation upon the reliance of the use of organs from executed prisoners and efforts to end the illegal practice of organ trafficking.

The support of the NHFPC for the Hangzhou Resolution was affirmed at the meeting with Minister Bin Li (and for the leadership of Dr. Jiefu Huang and for the transparent system for organ allocation --COTRS developed by Dr. Haibo Wang).

A proposal was made to the Minister that NHFPC convene a meeting of the international transplant community in China in June 2014 with the participation of the World Health Organization. The Minister accepted this proposal and plans are now underway to develop such a Congress. The agenda and involvement of the WHO and TTS and the request of TTS to major international organizations to participate in this proposed meeting will be dependent upon the fulfillment of the five-point NHFPC program and the cessation of organs being recovered from executed prisoners.

The Hangzhou Resolution was adopted by the OTC for all transplant professionals to comply with the five-point plan of the NHFPC as elaborated by Minister Bin Li and in accordance with China State Council law. The Hangzhou Resolution aligns the practice of transplantation with China culture and traditions and to WHO Guiding Principles (and those of the Declaration of Istanbul).

The Hangzhou Resolution concludes the reliance of transplant centers on the use organs from executed prisoners. It calls for a commitment of transplants centers to ensure that the source of organs is in compliance with international ethical standards. Immediately after the presentation of the Hangzhou Resolution on Nov 2nd, 2013, the leaders of 36 transplant centers made a written commitment to the cessation of organs from executed prisoners.  More hospitals are anticipated in the days ahead. The names of these centers and these transplant leaders will be presented to the international community to enable the publication of data from their centers in the medical literature and their presentations at international scientific congresses. 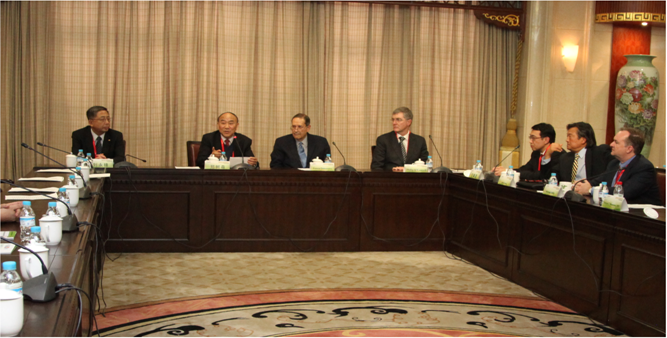 This picture is of China transplant leaders with TTS President Delmonico witnessing the signing of the Hangzhou Resolution by first 3 leaders of China to sign (symbolically of their leadership) --left to right: Xiaoshun He, Vice President, The First Affiliated Hospital of Sun Yat-sen University, Shusen Zheng, President, Chinese Society of Transplantation, and Yongfeng Liu President-elect Chinese Society of Transplantationcommitting their centers to fulfill the NHFPC program of Minister Bin Li ----and to no longer use organs from executed prisoners.

The resolve of all China transplant professionals not to use organs from executed prisoners.

With the release of the Hangzhou Resolution and the engagement of those centers committed to no longer use organs from executed prisoners, TTS and the Declaration of Istanbul Custodian Group will work withthe support of the China Organ Transplant Development Foundation to accomplish the widespread implementation of the NHFPC five-point plan throughout all the provinces of China involved with organ transplantation.

A meeting is planned for Beijing in June 2014 under the chairmanship of Jiefu Huang, that would invite the leadership of the major international societies (such as ISHLT, ILTS, IPTA and ISN) and major regional societies such as AST, ESOT, STALYC and MESOT -----and the World Health Organization, to endorse the changing practice of organ donation and transplantation in China. The agenda of that meeting would be to establish China as a model for the international standards now set forth by WHO Guiding Principles and the Declaration of Istanbul.  Data from the China transplant registries will be presented and compared with those of major international organizations in their review of worldwide data. The experience of those Chinese transplant professionals that have committed themselves to the program of the NHFPC espoused by the Hangzhou Resolution will be presented.

The strategic planning group for the June Beijing meeting with representatives from TTS--- John Fung, Frank Delmonico and Phil O'Connell (but not shown in this picture ad hoc at the Dragon until) and leadership of China (left to right) Huang Jiefu, Head of Organ Transplant Committee of NHFPC,  Yongfeng Liu, President-elect Chinese Society of Transplantation  Shusen Zheng, President, Chinese Society of Transplantation (and Haibo Wang but not in this picture). 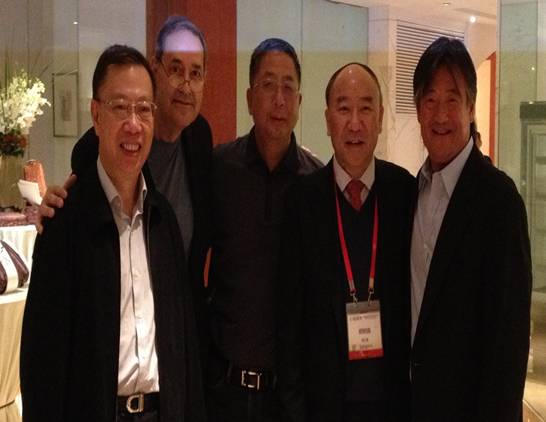 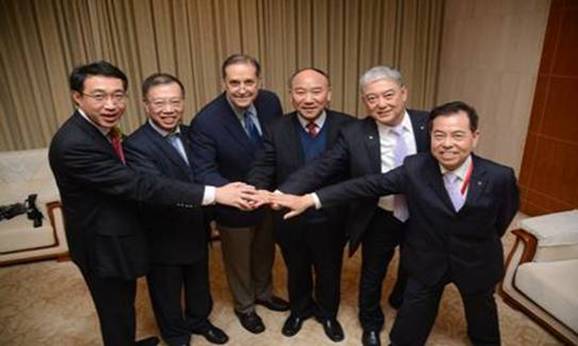 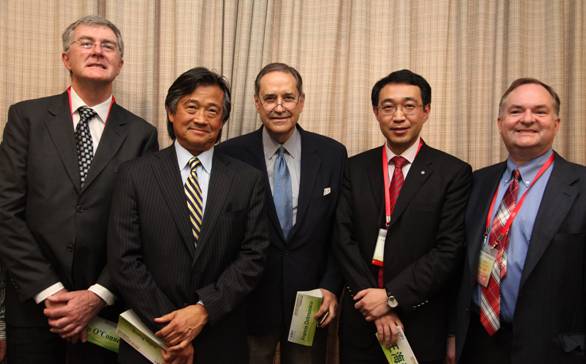